I wish I could’ve gotten this posted sooner, but thank you to the reader who sent me the information!

A theater company in New York is having a nine short plays on the Yemen crisis to raise money for Doctors Without Borders. The website says that it starts at 7pm, which I’m pretty sure was 30 minutes ago. 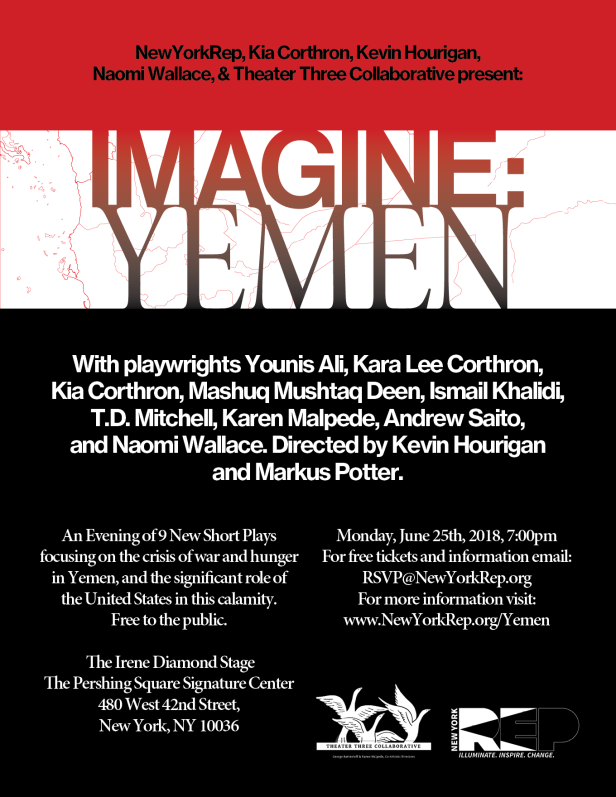 No child should die because their country is a battleground.

Fifty-thousand children died this past year in Yemen of illness, from bombs or starvation. Over 8 million Yemeni are currently at risk of starvation because of a war being fought on their soil between Saudi Arabia, with international (US and other) support, and the rebel Houthi. The situation in Yemen is the largest human-caused humanitarian disaster in memory.

“Who even knows about Yemen and the American involvement? playwright Kia Corthron confronting a photo of a starving child, asked playwrights Karen Malppede and Naomi Wallace, who answered, “We know”.

Money raised from audience donations will go to Doctors Without Borders, an on-the-ground, humanitarian relief group already working to save lives in Yemen.

After the event, the scripts will be available on a website for presentation, reading or teaching, free of cost, to any group, anywhere in the nation or the world.

We are proud to also be showcasing a short film in the Signature Lobby before and after the performance:

“Shakespeare in Yemen”
Directed by Katherine Hennessey and Amin Hazaber.
Screening sponsored by the Sidney E. Cohn Chair in Theatre Studies at the Graduate Center, CUNY.
With thanks to Dr. Marvin Carlson,

Visit - Socotra: Yemen's Legendary Island, Forgotten Island: Socotra, and The Manhattan of the Desert
Eat - Food Blogs: Recipes to make, restaurants to visit, and videos galore!, Honey, the elixir of life., and Breakfast Bread & Tea
Meet - Baby Zainab, Stories Behind the Numbers of the Conflict, Yemen's Displaced Women and Children, and The Man Going Back
The More You Know - Desert Locusts, What is Qat?, and Dhamar Regional Museum